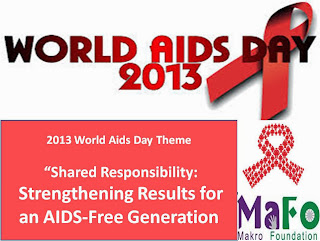 Every year, on the 1st of December is  marked to commemorate those we have lost to AIDS.On the eve of World AIDs Day 2013 Makro Foundation shows solidarity for people lost due to AIDS and  reflects on hope – hope for a generation free of AIDS. We would like to reflect not only on those who lives have been lost, but also those whose lives have been saved.

For the first time one can see an end to an epidemic that has wrought such staggering devastation around the world. For the first time we can say that we are beginning to control the epidemic and not that the epidemic is controlling us.
But make no mistake, stigma, denial and complacency are still among us, putting us in danger of failing the next generation. We must join our hearts and our voices––together we are stronger and route for zero new HIV infections, zero people dying of AIDS—and all people living with dignity and without fear of discrimination.

Makro Foundation wishes for a world free from the burden of AIDS and as a nation we have to work more towards creating a stigma free society. Makro Foundation  pledges  “STOP DISCRIMINATION KEEP THE PROMISE” .

HIV infection causes a lot of stress and depression and also leads to suicide. If you know anyone who is stressed due to HIV you can refer for free counselling at Makro Foundation call center-040-46004600.

Makro Foundation is an organisation working for promotion of Positive Mental and Emotional Health.For details log on to:www.makrofoundation.org

Posted by Makro Foundation at November 30, 2013 No comments: