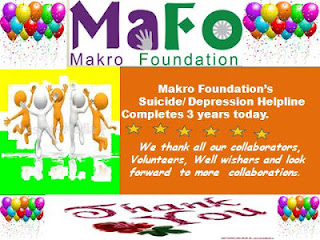 Mr. Sahendra aged 28 years has been suffering from restlessness, unable to concentrate in work for last 6 months. He had been in a relationship with a girl but 6 month before he broke up. Since then he did not know how to cope with it and got addicted to smoking, drinking. He has been bunking his work for quite some time. In a week he has not been reporting to work for more than 2-3 days as a result he has been served a warning notice. He saw the add in Sakshi news paper and called us..
Ahmed has been suffering from continuous headache for over a month, feeling stressed, depressed thinking about his future as he was getting rejected interviews after Interviews… He labeled himself as Failure and thoughts of what is the use of this life.. It’s better to die feelings ..He had attended a Suicide Prevention Awareness Program in Ranga Reddy District and called the helpline 040-46004600 for help.
Abhigal a 24  years Engineering graduate  from Nasik worte saying that he is not able to get back to his regular routine and regime how much he was trying for last 1 year. He had a failed marriage and the burden of failure of relationship is killing him from within. He has lost complete touch with reality and has been living in the world of unreality since last 1 year feeling very depressed most of the time; mind has thoughts which are all negative in nature and not able to cope with daily life skills approached us through Live Chat. He came to know about our service while he was surfing the Internet.
Rewathi aged 35 years was known as a strong person, always willing to help others. But after sudden death of her husband she had a breakdown, her family/friends didn’t know she was the one who needed help. She was not eating anything and  wasn’t sleeping. She was shaking and suffering huge anxiety, but didn’t know that she was ill. Her family took her to the doctor who gave anti depressant pills but did not say what the issue was. Once her elder son got the flyer in bus stop and saw the same symptoms in his mother and they sought help at our helpdesk..

Makro Foundation has brought a change in the lives of people like Rewathi, Abhigal, Shahendra  Ahmed  by reaching out to them, listening to them, understanding their needs, intervening through  counseling, therapies and wholistic mental health development program. They are able to lead a normal life now..
Makro Foundation since last 3 years has been intervening for people suffering or affected from Depression or struggling to deal with the emotional turmoil inside them. Till now Makro Foundation has been able to make a difference in the lives of over 3000 people affected with Depression or Emotional issues.

Mental health and Hygiene is equally important as physical health and hygiene. Let us shred the inhibition that Mental Illness is not curable and come forward talk about it, deal with it and live a healthy life by seeking help.
Posted by Makro Foundation at December 18, 2012